Where Has The Time Gone….!

Burnett & Hillman would like to express its thanks and gratitude to one of its longest serving employees, Alan Baker.

Alan has decided to retire at the age of 77, after nearly 50 years of service!

Burnett & Hillman was established in August 1965 by Basil Burnett and Roy Hillman. Alan was one of the first people that Basil & Roy employed as the company began to grow. He joined us in August 1966 as a production engineeer from EMI, where he had previously worked with Roy.

During the next few years the company began to grow and develop further and Alan found that his skills and knowledge could be equally useful within the ever expanding Sales & Stores team. This turned out to be a fantastic decision: Alan was very hands on and became an incredibly important part of our team, passing on his vast knowledge and training to our future employees.

Alan’s contribution to Burnett & Hillman has been invaluable and he’s held in high regard by our current employees.

“Alan is a respected, appreciated and well-loved member of our staff and we shall miss him very much” – Bridget Hillman 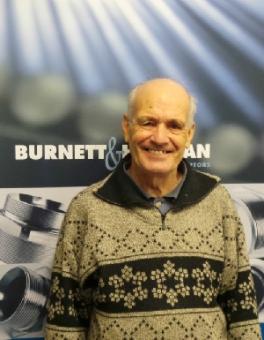